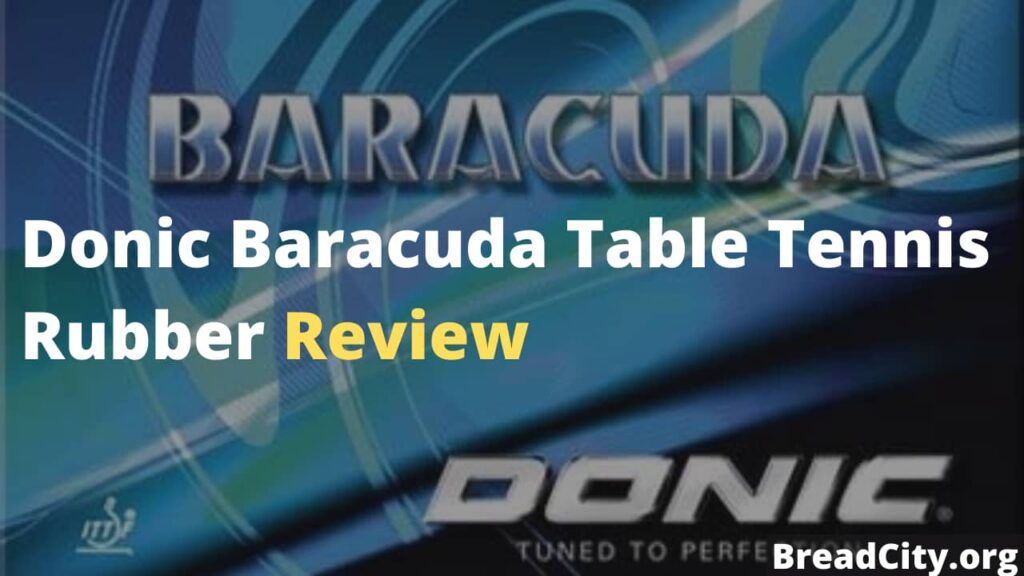 Some of the most popular paddles and rubbers are made by several different companies, so consumers have a broad range of options to choose from.

The Donic Baracuda is one of the most popular rubbers on the market, with an average rating of 4.5 out of 5 from many consumers. In the European tradition, Donic Barracudas have a soft sponge and less-than-tacky top sheet.

More forgiving than Chinese-style rubbers, it enables players to generate significant levels of spin and speed on the court. This rubber has generated quite a stir in the business, but what exactly is it?

You never know; it may become your new table tennis favorite. I’ve done a thorough study about this one. Learn all we know about the Donic Baracuda Rubber in our entire review if you’re interested in learning more about this particular rubber.

Following the table’s specs, the remarkable characteristics of the Donic Baracuda table tennis rubber are described.

A built-in speed adhesive effect is included in the Donic Baracuda rubber, which makes it very dependable for table tennis. When seeking for techniques to boost the spin, you may count on it to provide excellent results.

Its precise structure allows even those who were striving to learn the craft to experience an increased spin. Many things were taken into consideration while developing it.

When it comes to table tennis, those planning on getting the most significant outcomes to enjoy it, using innovative spins, will deceive your opponent and make it simple for you to obtain the most critical outcome possible.

Even so, I’m a big fan of the rubber’s ability to enhance spin. So if you’re interested in the excellent grip, then the Tibhar Evolution MX-p 50 is also a superb alternative.

2. Excellent control, suitable for both pushes and chops – 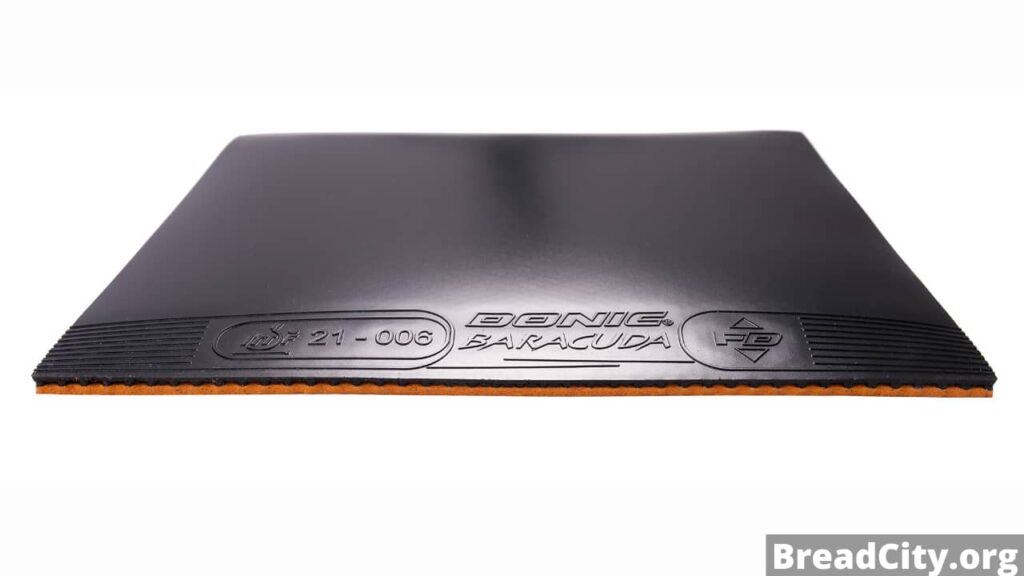 The Barracuda excels at close-range play on short pushes. It generates a lot of backspin, which causes the opponent to make a lot of mistakes.

To make matters even more interesting, the rubber is susceptible because of its soft sponge and can tell the player exactly what went wrong whether they attempt a push, slam dunk, loop, or service; thus, it gave me perfect results to further use it.

The Barracuda’s soft sponge makes it ideal for hitting backspin balls since it is less vulnerable to rear and backspin than other rubbers.

Backhand side and forehand flicks may be performed with exceptional consistency because of the rubber’s ability to create high levels of speed and topspin.

There is a smooth texture to the rubber that was employed. Because of this, it is intentionally created soft to provide the optimum outcomes when you strike the ball.

Many people enjoy it, especially those who are looking forward to obtaining the highest possible results. It was created with that in mind because of the requirement to attain precise outcomes when you hit the ball.

The ball may bounce at specific angles, causing the rubber to be noticeable.

4. Defeats the opponent at their own game –

Whenever it comes to rolling speed, the rubber gets a 90 out of 100. Rarely do rubbers achieve incredible speeds? Table tennis players are always trying to find new techniques to speed up their game to get an advantage over their opponents.

To get the most out of your favorite game, you can rely on rubber. To surprise your opponent, this rubber has a high-speed and spin design. Having a suitable rubber on your bale is critical to your success in competitions.

Design-wise, the rubber is impressive. You’ll always be proud of yourself after you’ve put the rubber on the road. 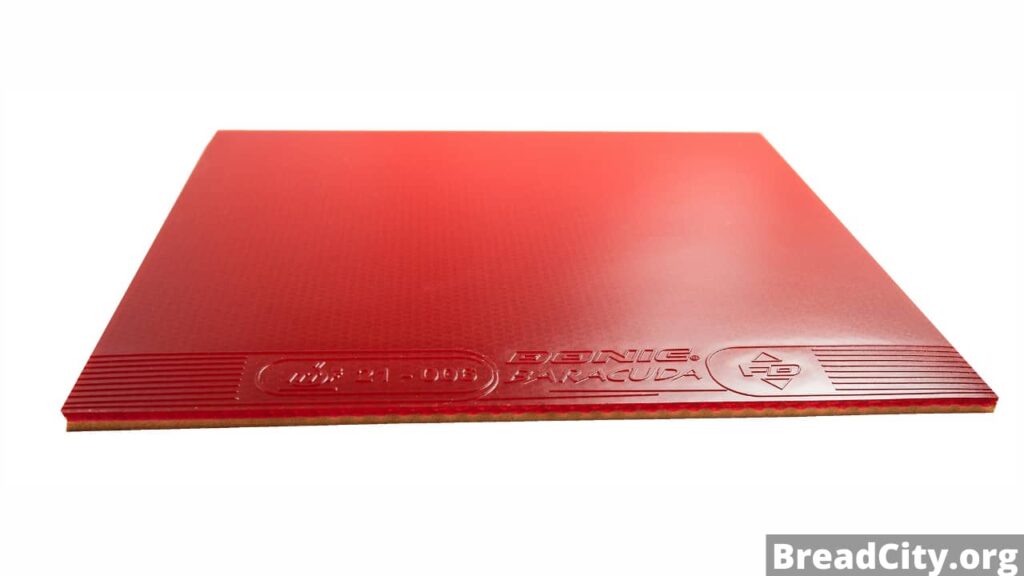 Barracuda’s more comprehensive spectrum of pace and rotation serves as a challenge to predict in match settings for many players. The opponents will have difficulty reaching the ball over the net because of the tremendous amount of spin it generates.

Your opponent will have practically no time to respond to a fast, deep serve.’ When a tremendous amount of spin is created by this rubber, it may lead to more mistakes from the server because an elevated serve is retrieved.

It will most probably come with even so much spin than was first conferred even during the hit. Consequently, novice players should avoid this rubber since they are more likely to be defeated upon their spin here on the third ball, instead of their opponent’s spin or play, than by their opponents.

Amid all these features, let’s see what Donic Baracuda Rubber has to offer.

Pros and Cons of the Donic Baracuda Rubber –

Here are the Pros –

1. Blade control is both elegant and practical:

Your ability to manipulate the blade is essential while playing table tennis. It is critical to choose a knife and rubber that will allow you to maintain better control. When it comes to handling the Donic Baracuda, you may get up to 70 ratings.

When compared to the majority of other rubbers in its category, it performs remarkably well. After you have the rubber, your overall gaming experience will enhance in a variety of ways.

You may relax as you play since it was designed to make your job easier. Rubber is popular due to its high-quality construction, which attracts many customers.

For improved precision, the rubber is constructed with a smooth surface and an arch shape. Using it while playing the game will help you get the most remarkable outcomes possible.

If you can increase your accuracy while striking the ball, you will easily win the competition. To improve precision, the rubber surfaces are designed using high-quality materials. Using it to increase your shot delivery is a possibility.

3. Worth the investment in a long-lasting substance:

You may expect long-lasting performance from the rubber since it has been carefully chosen. A rubber that will last you for a long time is what you want. Quality rubber will endure for a long time, ensuring that you get the most for your investment.

Because of the excellent quality of the surfaces, the best possible outcomes may be achieved while you are playing the game. A robust rubber should be chosen to be used for an extended period without breaking down.

In the long term, you will come to appreciate the worth of cash. After purchasing the rubber, you will be able to extend your playing time.

The longevity of Donic Baracuda is certain, but I have a strong view of Butterfly Tenergy 05 incredible feel, which generates peak speed and spin. Consider taking a look if you’d want to effortlessly unleash a barrage of powerful shots.

4. Seamless locking for a flawless defense:

One of the most potent weapons that the Barracuda has is its ability to block shots. This rubber makes plugging practically effortless; it has enough inherent power to quickly drive the ball back over the net.

Since it is less sensitive to spin, even catching balls with vast quantities of topspin is not a problem when obstructing it with this rubber. This rubber can transform a defensive play, like blocking, into attacking counterattacks with little to no additional power exerted by the user.

The Barracuda may bring a significant new layer of complexity to any player’s game with the ability to disguise oneself. Aggressive opponents will be forced to second guess their strokes for concern that the strength they are striking with will be utilized against them.

Here are the Cons –

1. Attention is needed while working with medium hardness:

The short game took a severe beating. Heavy backspin or ghost serves were tough to return. The backspin/underspin seemed to impair pushing, but it wasn’t an issue. Spinny and non-spinning blocks didn’t appeal to me, either.

A flat or no spin ball on a block practically had no power or speed as it returned to the table and often ended up in the net. This was when the gears started to come in. The rubber used for this shot required a higher effort to stop it than had previously been appropriately needed.

While I was a fan of the amount of spin it produced, I was not a fan of how quickly the rubber was damaged by spin. I had a considerably more difficult time dealing with a player that relied heavily on topspin.

You practically have to curl your wrist entirely over the table and shut it, so it is almost face down to block effectively.

What’s the rubber’s thickness? More than or equal to 2 millimeters?

When it comes to the speed, can you go into further detail about that?

In my opinion, the nicest feature of this rubber was its spin. You can also feel it on the surface, and I notice that the sponge’s firmness ranges from medium to soft (probably more toward soft).

However, despite its toughness, it lacks control, but you may learn to master it with work and patience. Because of its high throw, it’s essential to exercise caution while using it with rapid blades.

It is not affected by humidity as much as other rubbers, and it lasts for a lengthy period of time. When I received my purchase of a red sheet, I also had a black one that I liked since it’s a year older and has had more playing time.

Overall, this is an excellent rubber at a reasonable price.

Is Donic Baracuda rubber’s spin as great as it appears?

A.3 Barracuda has a tremendous spin potential, excellent throw distance, and a medium swimming speed. It’s simple to lift large objects with a good ball grip. Sponge has a “CLUCK”-like vibe to it, but it’s nothing spectacular.

Suitable for use at either a close or a distant table. Barracuda is a lot easier to play than Tenergy 05 for me; it’s more forgiving and safer, and it’s more fun.

Tenergy 05 requires a hefty brush for several strokes in order to loop the ball. Last but not least, the top sheet is made of natural rubber instead of the synthetic rubber used on the Acuda Blue series and rasant grip.

The Donic Baracuda, in my opinion, has a structure that guarantees excellent spin. A wide range of players may achieve speed and control. Professional table tennis players who want to improve their performance greatly benefit from it.

The surfaces are very resistant to wear and tear, allowing them to endure a long time. Even after many hours of playing, it continues to provide the correct spins.