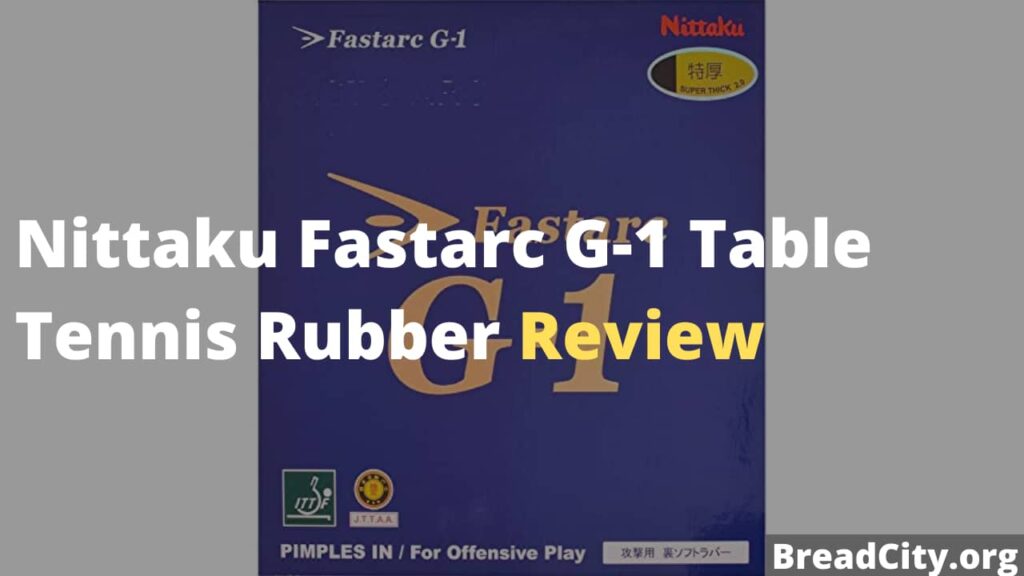 Are you seeking a rubber that is both rapid and balanced to pair up with your table tennis blade? The Nittaku Fastarc G-1 Table Tennis Rubber can be a perfect fit for your blade. I just wanted something a little more bouncy, and I thought this might be it.

The thick and rigid top sheet is uncommon nowadays, especially in European rubbers. I applaud Nittaku for going in this way since it provides something unique to the market and appeals to a specific group of players.

The rubber’s Arc was a great surprise, and being able to hit winners from that deep below the net with such ease was a lot of joy.

I would suggest the Fastarc G1 to anyone who enjoys playing extended rallies with a lot of spin, safety, and precision. Let us now look at some of its merits. 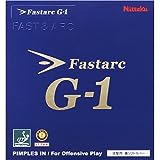 She pairs it with the challenging short pips NITTAKU Moristo Sp Rubber on her backhand and the Nittaku Acoustic Table Tennis Blade as her blade. Masataka Morizzono of Japan, rated 49th, is the next highest player.

On both sides, he employs inverted rubbers. Morizzono’s backhand is a Nittaku Fastarc g-1, while his forehand is a Tenergy 05. The DHS Hurricane King III Table Tennis/Ping Pong Blade is his preferred blade. 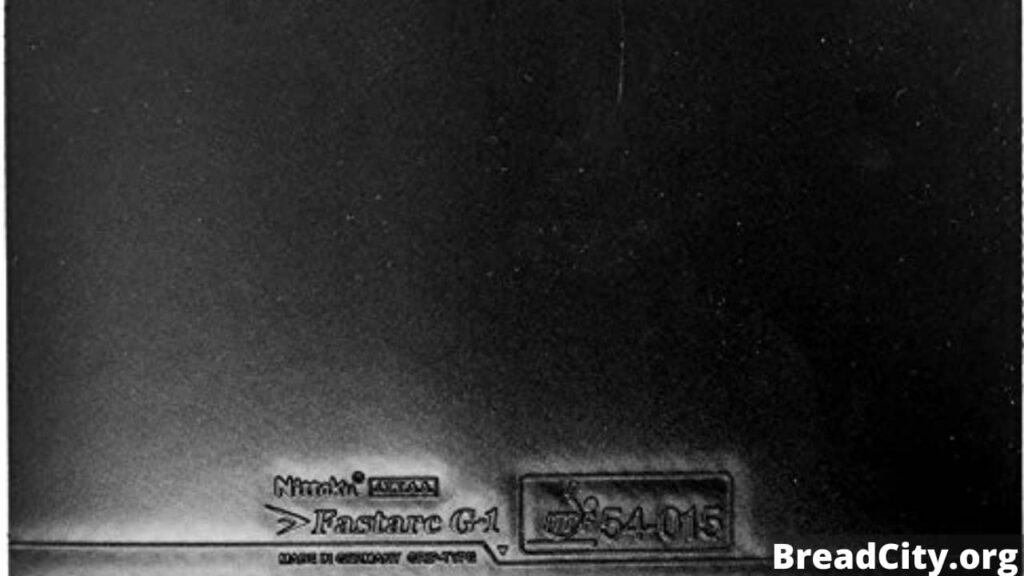 With Fastarc G1, you can circle all day from mid-distance. You can absorb a lot of speed when you block, but the redirection is complex.

It always seemed like the way the ball came at you significantly influenced how much you had to correct, a lot more than with other rubbers.

The surface has excellent tackiness and stickiness, but it’s a tough surface, so the rubber doesn’t bend around the ball. While I could generate a nice spin on the ball, it ended up traveling high and sluggish, which my opponent could easily counter.

Fastarc G-1 excels at all distances from the table, which is a unique selling feature. Most rubbers appear to be designed for a specific distance, but this one does it all. Spin engages at lower speeds even though it is not really sticky.

This not only results in powerful loops near to the table, but it also improves your services and flips. Its spin-insensitivity complements this rubber’s excellent spin capabilities.

This is a fantastic skill to have since, more often than not, spin is a double-edged sword — you can easily generate it, but you are also quite vulnerable to it.

Nittaku Fastarc G1’s speed delivery is relatively linear, so it does not feel particularly fast at first, but it is quite rapid when you engage the sponge. Because the sponge is 47.5 degrees, it has a lot of potential for speed.

Nittaku Fastarc is around 85-90 percent the speed of Tenergy 05 and, in terms of speed and power delivery, is comparable to the TIBHAR Evolution MX-S Table Tennis Rubber.

You might not believe it’s quick, but by swinging hard and fast, you can uncover this rubber’s potential.

1. One of the Most Spinnest Rubbers:

Spin strikes at the core of the Nittaku Fastarc G-1’s best attributes. It is the spinniest in the Fastarc series and one of the most spinny rubbers on the market.

The rubber has a medium-high throw angle and, as the name implies, makes a noticeable arc when looping. This reminds me of rubbers such as the Tenergy 05.

When looping, having such an arc provides you with more clearance above the net and allows you to loop from a lower position. An oncoming spin should not cause you as many problems as you may imagine with the G-1. 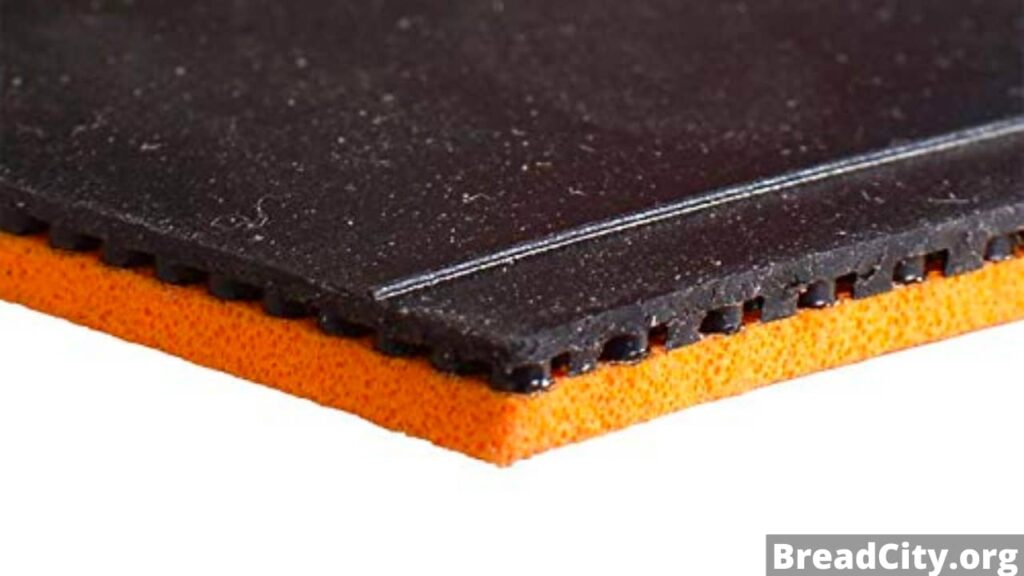 When you engage the sponge, the Nittaku Fastarc G1 has one of the highest trajectories of any rubber I’ve used.

Only Tenergy rubbers have a more significant arc, in my opinion, and since this rubber is created by ESN, which usually has a low arc, this is rather amazing.

I didn’t believe they were the most powerful loops, but they were ideal for the all-around player who plays a tactical spin game.

Fast looping with a thicker contact was incredibly nice and simple to accomplish; it has a remarkably high arc and medium speed, allowing you to be very consistent and have some good rallies.

The Fastarc g1 has a delightful crisp feel, but it can get a little mushy when you activate the sponge, which is strange given that it’s 47.5 degrees. When hitting power shots with this rubber, it feels soft, or at least softer than 47.5.

Slow shots with only the top sheet feel sharp and firm, but shots with the sponge seem mushy and squishy. Nittaku Fastarc G1 is a one-of-a-kind rubber if I had to make a broad statement.

In terms of power, the Fastarc G-1 is fairly decent since it has the speed to easily overwhelm your opponents. It also gives you a lot of control over how much you want to produce because it has a lot of gears and plays in a consistent manner.

Its many gears are owing to the lack of an intense catapult action. In this aspect, it differs significantly from the Butterfly Tenergy 05 Table Tennis Rubber, which has a powerful catapult effect.

The Nittaku Fastarc G-1’s final excellent characteristic is its durability. It is one of the most durable rubbers available. This means it won’t need to be replaced as frequently as conventional rubbers, saving you money.

Nittaku Fastarc G-1 is one of the best rubbers available, and it doesn’t have any significant flaws. The only issue I discovered was among players who complained about having problems using the rubber in the high gears.

It was often impossible to keep the ball on the table at these speeds since it strayed so far. Because the rubber has a high control and linear character, I believe this issue was caused mostly by erratic arm movements — a lack of control on the player’s part.

This is very typical; it’s natural to lose control when you’re utilizing nearly all of your arm force. The Fastarc G-1 is not the most difficult rubber to use, but it is best suited for expert players.

These medium-hard rubbers have extremely comparable properties. Both are quick, but they prioritize spin above speed. They have an equivalent level of control, giving you a lot of confidence when you strike.

YASAKA Rakza 7 Table Tennis Rubber has a slightly lower throw angle, but not by much. Both are classified as medium-high, whereas Fastarc G-1 has a higher loop trajectory.

Rakza 7 is an excellent alternative if you’re less experienced and want something a little more forgiving. Fastarc G-1, on the other hand, is undoubtedly the best pick if you have more of a killer instinct and outstanding technique.

Does the rubber provide good control?

It’s really linear and sluggish, and the thick hard top sheet lets you play with a really high degree of precision; it’s excellent close to the table, and the control is incredible.

Fastarc G1 is also highly linear, making it simple to add power with precision. It takes some force to effectively penetrate the top sheet into the sponge, affecting how the top sheet and sponge interact.

How does the rubber provide spin?

It has a reasonable degree of grip on the top sheet but not the best, and because the top sheet is very stiff, I found it difficult to get the rubber to ‘bite’ the ball while looping. When I tried to brush the loop, I got varied results.

However, things began to improve as I engaged the sponge a little more with a thicker contact. The arc becomes much more prominent when you activate the sponge, and adding spin becomes much simpler.

This rubber, I suppose, is intended for individuals who play a tactical spin game from a medium distance.

The patient attacker is a player that does not want to dominate the opponent but rather enjoys scoring points by employing angles, spin, and getting your opponent into difficulties before charging in for the kill.

It also suits players who like a high margin of error for their strokes and place a premium on consistency above everything else.

The high arc provides more safety in attacking shots, while the medium speed allows for better consistency, and the linear nature allows for a lot of flexibility.

Nittaku Fastarc G-1 is a versatile rubber that is best suited for offensive loopers. With its incredible spin and superb control, it’s no surprise that it’s this year’s best-selling rubber. Unlike many of its competitors, it has no visible defects, and it is reasonably priced.

Given the same high ball flight trajectory to Tenergy 05, I’m sure some people will compare the two. Fastarc G-1, in my opinion, is an excellent buy for the price. It is significantly more cost-effective and lasts far longer.

In fact, I would recommend looking at the other Fastarc rubbers as well. It’s unusual for all rubbers in a series to garner such overwhelmingly positive feedback.