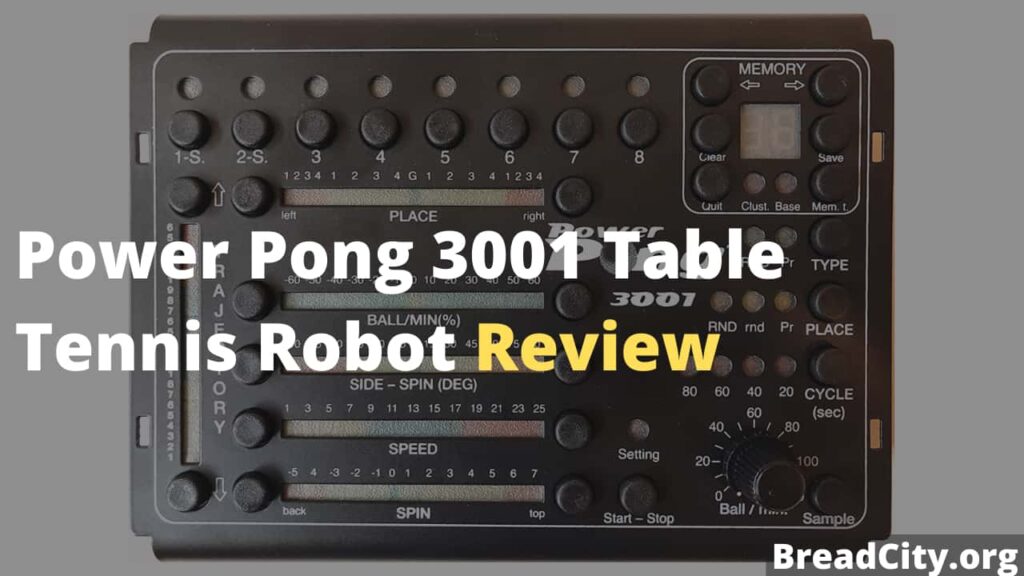 To improve your table tennis talents and consistently improve your performance, it is an unavoidable fact of life that you will need to use a ping pong bot for training purposes.

Because you cannot always find someone to practice with, having a ping pong robot on hand would also be nice. It is hard to exaggerate the value of keeping a trainer robot on hand to assist you in this situation.

Suppose you cannot find an appropriate training partner who’s really powerful enough to equal your own power. In that case, you may be forced to practice alone. It is undoubtedly required to use the Power Pong 3001 robot to handle these situations.

Compared to the Power Pong 2001, it offers much greater memory capacity for storing exercises and the ability to generate 8-ball drills. This tool will also allow you to organize routines into clusters, which will enable you to plan out your whole training session.

Unlike previous Power Pong models, the 3001 includes a three-wheel head, shown initially on the Butterfly Amicus bots. The announced three robots had rendered all other robots obsolete for the most part!

One of the benefits of purchasing a table tennis robot with such a three-wheel rotor is that it can create almost any form of spin possible during a single point or workout without the need for you to make any human modifications.

Three-wheel robots are exceedingly simple to operate, highly precise, and provide the impression that you are playing against a genuine human adversary. You may even alter the number of spins that each ball generates.

Following your experience with a three-wheel robot (such as the Power Pong 3001), you won’t want to play with something else again!

2. Permits up to eight-ball exercises – 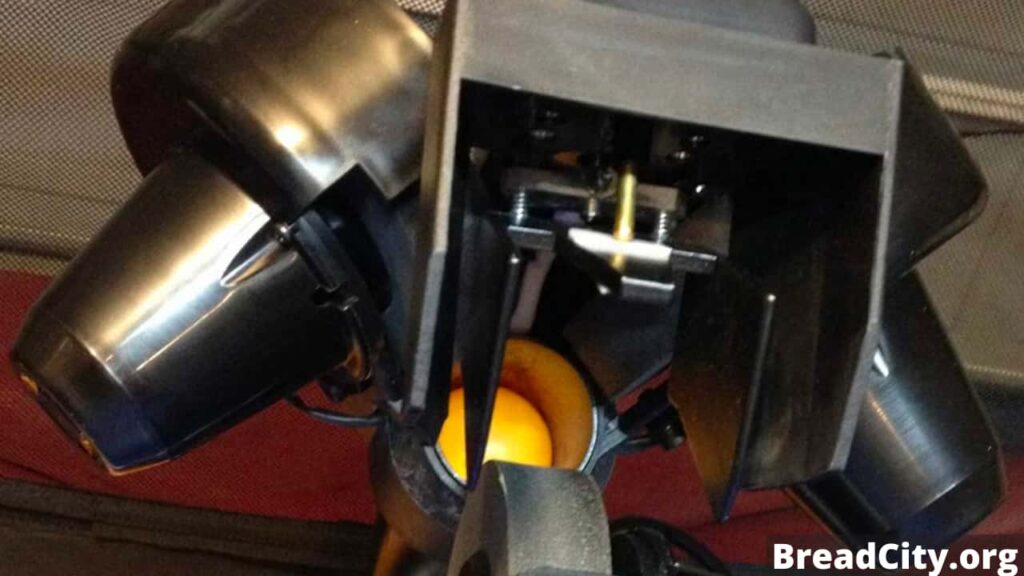 You may play exercises using up to eight balls on the Power Pong 3001, including a service at the beginning of each game. Just this little bit of information will be sufficient to recreate a point scenario! In addition, you may make various tweaks to the speed, spin, and location of each ball in the exercise at your discretion.

The Power Pong 3001 has a memory capacity of up to 99 drills. It comes pre-programmed with 22 different exercises to get you started before creating your own custom drills.

Drills may even be grouped together to form a “cluster.” In other words, you may program a whole training session (with a maximum of 33 drills) into the robot. Exercises may be launched in rapid succession or at random, resulting in a legit gaming environment. It’s very clever!

The RND mode is also delightful. It introduces a degree of unpredictability into the positioning of the balls, as opposed to placing them in precisely the exact location every time, which would be unreasonably repetitive.

Attila Malek, a USATT Hall of Fame member, sells Power Pong robots. Every robot he sells comes with a fantastic three-year guarantee, which is unheard of these days.

This implies if a problem occurs with the Power Pong robot within the initial three years of ownership, your robot will be repaired or replaced without delay. That is all that can be asked of anybody!

As a result, Power Pong gets its robots directly from the company (LCS) in Hungary. Attila (and others) have received specialized training to restore these machines in the United States.

1. An unrivaled level of excellence –

There is no need to be concerned with the quality and longevity of this ping pong robot since it is manufactured by the well-known company power pong, which is recognized for providing high-end gaming equipment of the highest possible quality and durability.

More importantly, this robot comes with an extended warranty term of three years, ensuring that you will receive nothing less from a well-made device that will give you flawless gaming for many years to come. 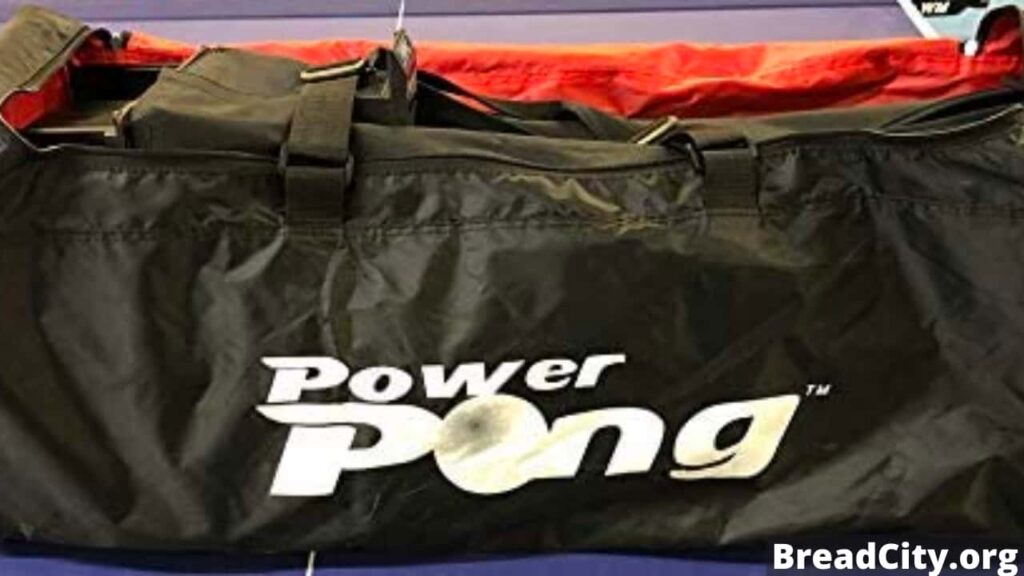 When you use this robot, you will only get the most incredible gaming experience possible. It enables you to pick from various play modes and includes all of the necessary attachments, guaranteeing that you can play for an extended period without becoming too hot or creating too much noise.

I believe that, with the assistance of this robust robot, you will improve your artistry as you increase the number of ball contacts.

Accuracy, grip, quickness, and even your reaction to spins will all be improved, allowing you to perfect your talents and provide your best shot in the process.

3. Numerous possibilities for shots and spins –

All conventional ping pong tables may be accommodated by this unit, which is exceptionally easy to construct. Putting it together on the opposite side of the table takes no more than ten minutes, and you can begin playing as soon as you get it off the box.

To accommodate both pro players and those wishing to improve their game, power pong chooses spin settings in this model.

You may train the robot to use spin on the ball, backspin, topspin, or even a mix of spins to get more experience in hitting various ball types.

If you don’t feel comfortable hitting the whirling balls that stand in your way, you may use this robot to pick an alternate form of a shot.

Six different shooting options are offered, including the chop, the lob, the push, and the services. The movements of another player are imitated each time the ball is thrown.

4. The Aid of remote control –

The ability to utilize the connected remote to alter power, tempo, spins, and oscillation is one of the most intriguing features of this device.

In addition, players may establish their own rhythm and steadily boost their training standards by gradually raising the complexity level they think necessary using the connected remote control.

Because of the remote control, the scorching ball-feed service is available since one will not have to vacate their side of the table to use it.

Apart from that, players may modify their balls’ spin somewhere around backspin and topspin and the oscillation of the balls on the table.

1. A robot with a hefty price tag:

The Power Pong 3001 covers a range of features that provide you with several compelling reasons to purchase this robot; however, a significant drawback of this robot is that it is pretty expensive to buy in the market.

It is comparable to the iPONG V300 in that it is fast and easy to set up and compact and compact. You may adjust the number of balls that appear from 12 to 70 per minute, and the speed and spin of the balls, by using the remote control linked to the machine.

Can you tell me about potential less expensive substitutes for this robot?

It is a terrific robot with a lot to offer, and the Paddle Palace Robot H2W Touch Pro is no exception. However, one of its most significant drawbacks is quite expensive.

As a result, several less expensive alternatives are available on the market, such as the Power Pong Omega or the iPONG Trainer Motion. These are far less costly than the Paddle Palace Robot H2W Touch Pro while having almost identical specifications.

How tough will it be to keep and consolidate?

No, I don’t think it won’t be easy to assemble this robot. Because there are none, the Power pong 3001 thrives in the assembly line department. It is pre-assembled and may be used with any table tennis table or conversion top.

In addition, it folds up for simple storage and transit. It accommodates all regular ping pong tables and is incredibly simple to assemble, disassemble, store, and carry. The ease of use and total pleasure of customers are the results of this.

Do you think it’s a sensible idea to acquire this robot?

This is the one for you for those who want a one-time expenditure robot and are serious about table tennis. In addition to being very versatile, it’s also great for rough play.

You may practice your strokes, abilities, and game in general with the help of the robot, which puts the ball exactly where you want it every time.

Moreover, it offers a one-year guarantee term, a great perk! That being said, this robot is all you’ll ever need if table tennis is your thing.

The world’s most acceptable ping pong robots represent the various circumstances that might occur during matches. These choices and possibilities are mirrored in the opportunities and choices they can supply you.

Power Pong 3001 is highly recommended because of its numerous features, including frequent software and firmware alerts for improved performance, compact and light home automation for your comfort, and configurable time intervals for customizing your practice session. It is well worth your time to look at the Power Pong 3001.