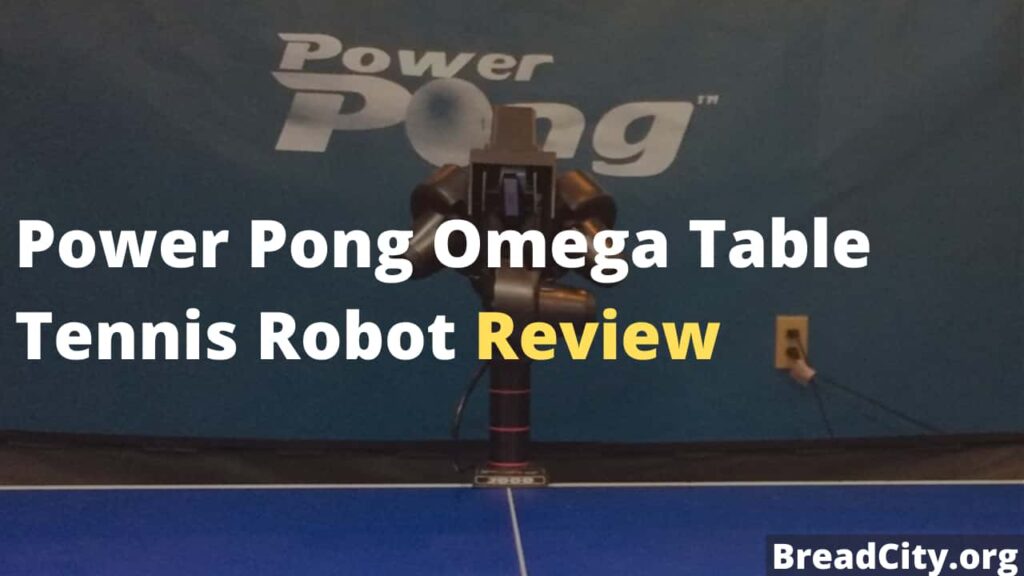 A good table tennis robot should have various features and skills suited for athletes of all ability levels. For professional players planning to buy the best table tennis robot on the market in 2021, and even pro table tennis players would be happy, you should check out the Power Pong Omega.

It’s easily the best ping pong training robot for the money right now and is a state-of-the-art and versatile ping pong robot that blew me away with the features it offers.

This is the new and upgraded version of the Power Pong 5000. It comes with its tablet and can also be controlled with your iPhone, iPad, or Android.

It’s a competition to the Butterfly Amicus Prime and is almost similar in its design and characteristics, even made in the same factory.

I could create drills with up to eight balls to give me great flexibility in my training and store up to 99 routines in the controller box via the Bluetooth app that allowed me to command it via my smartphone.

1) The Android tablet comes in the package:

With this, I get to have the most modern functions. I could group drills, categorize and program them. There is also a function of a random selection of the ball. On the other hand, the speed and rotation of each ball can be adjusted individually. 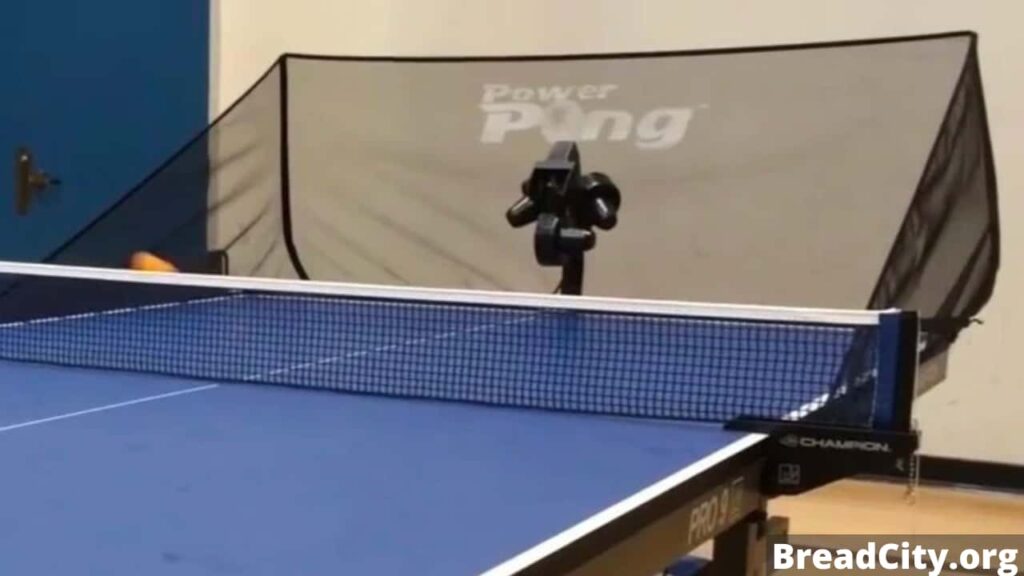 Till there are balls in the system, the robot will continue to work, and the net only helps to get the balls back to the right place. This ensures prolonged playtime and also reduces the hassle of collecting balls again and again after every match.

This provides me with all possible rotations, and I could change them during the exercise. All in all, it is adjusted using the Android application on the tablet or my device. Activities can be performed with up to 120 balls per minute, according to my request.

4) Drills with eight balls and different types of turns, speed, trajectory, and placement:

With this, I could program each ball individually. For example, if I want a short pimp ball on the forehand and the subsequent long ball on the backhand. After that, the third spin ball in the middle of the table can achieve all this with the Power Pong Omega robot.

The robot can play everything one after the other as we set it or at random according to its wish. There were also pre-determined drills that I could practice. I could also use tagging to determine which activities to do for each player.

Power Pong Omega offers many options, the most important of which are:

Firstly, speed, spin, side rotation, and delay time until the next ball. All this is set at the bottom of the tablet screen.

Secondly, the ball’s position on the tablet screen indicates precisely where the ball will come to you on the table, so you can determine and program each one individually for later practice.

Thirdly, the ball’s trajectory is determined on the right side of the screen, which means how the ball will travel to yours, whether it will already have an arc or will arrive directly and right as if the opponent was hitting a clean ball towards you. 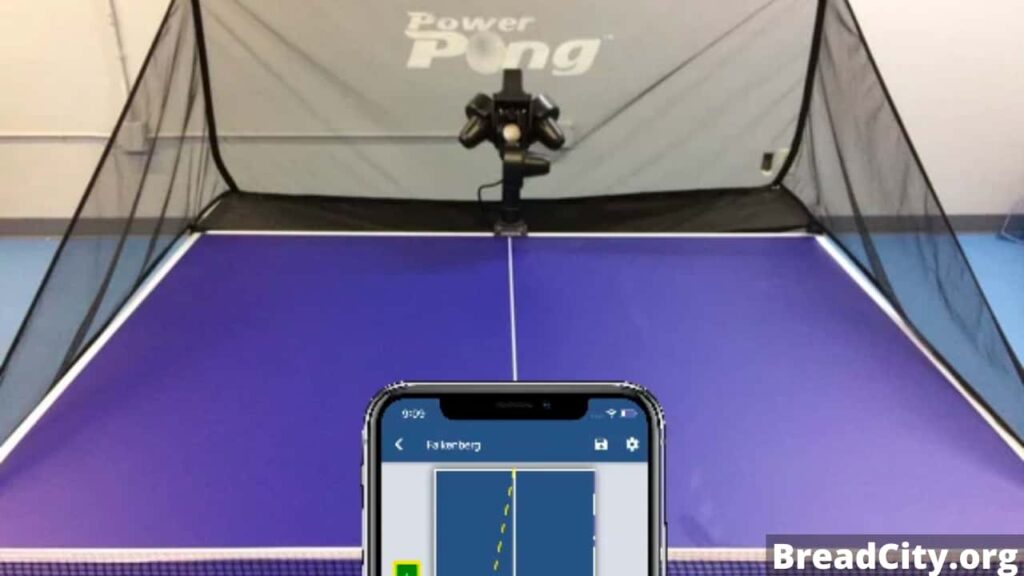 Power Pong offers three years of parts and labor warranty, including a 1-day fix or replacement service. In the sporadic case when something goes wrong, Power Pong will fix or replace your robot and send it back to its customer within twenty-four hours after receiving it.

However, the warranty does not cover misuse of the product. Customers can also return Power Pong robots within ten days. A restocking charge of 15% of the robot price will apply.

Produced robots must be in the original package in a clean, resalable condition. Parts are guaranteed to be available within five years of purchase.

This app makes creating drills with eight balls with various types and volumes of spin, speed, trajectory, and placement easier. I could adjust the speed, spin, and placement of each ball individually.

I could also use tagging to set different drills for each family member, share routines with coaches and players from the app, and set the ball’s placement by dragging it on my screen.

The ball’s trajectory is automatically calculated through this app using the given speed, order, and spin. There’s no requirement to fine-tune this manually like in other robots.

Mirror drills are an option that helps opposite-handed players, which is not common in other alternative robots. There are memory slots for saving your favorite drills and ten cluster memory slots, each containing up to 33 routines.

Pre-programmed drills are also included and can be changed or adjusted. A US-based development team is actively working and enhancing the app, and as a customer, I receive free updates. The app is easy to download onto our Android or Apple phone via the app store. 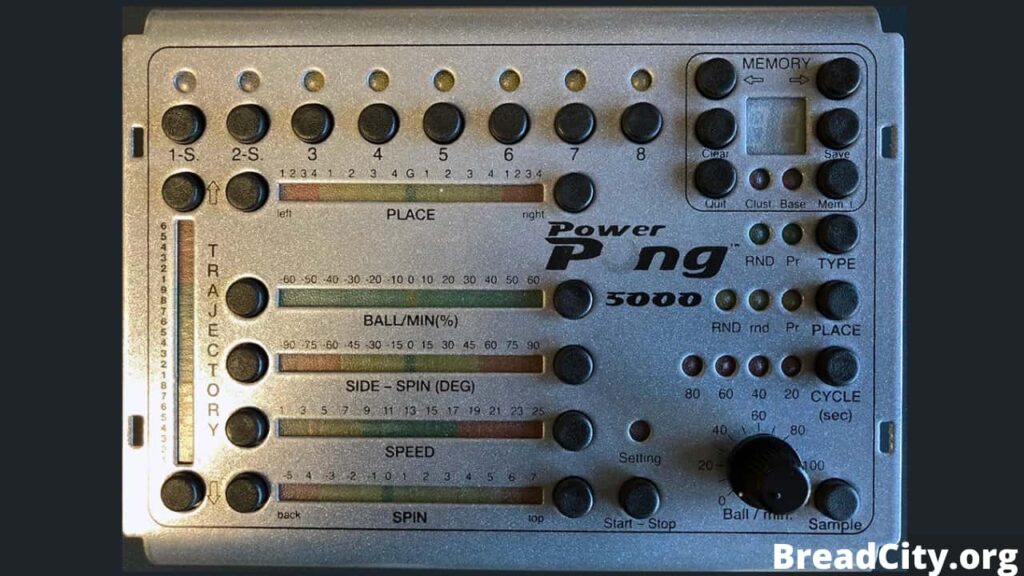 When it comes to ping pong robots, no one can really beat Power Pong! The high-spec, app-controlled Power Pong Omega robot really is the best ping pong robot money can buy – undercutting the Butterfly Amicus Prime by $100.

Creating drills directly on the app is one of the most amazing features of this robot. Now I can share and adjust sequences and drill videos that you can view on YouTube.

The robot offers a large number of different types of strokes. With spins, there is more or less rotation, serves with various rotations, block, lob, clean ball, pushing, cutting, all with the help of the program that I can adjust.

The mirror function helps provide the exact drills I set depending on the player, whether right-handed or left-handed.
-In service, you have the option to set an unavoidable downtime to simulate the actual course of the match because no player serves the ball immediately, one after the other.

It can suggest features and updates directly to developers to compose an exercise appropriate for you. If you’re not interested in the Bluetooth/app functionality, then the Power Pong Delta is the bot for you.

It’s primarily similar in performance to the Power Pong Omega but is commanded via the classic control panel. If you are a player on a slightly lower budget, then the Power Pong Alpha is a great option.

What has been included in the package?

Does it come with a control box?

No. Power Pong Omega does not have a control box, but the player can control and program the robot from the tablet provided to them from their device like mobile.

You can control everything from speed, spin to even time with this tablet. Throw angle and ball trajectory can also be pre-decided with this.

Does it come with a tablet?

Yes. Power Pong Omega comes with a tablet, so you do not need to use your iOS or Android device. The tablet helps you to control the drills, throw as well as speed and angle of the ball. You can also schedule group drills, categorize and program them.

The best ping pong robots in the world are reflected in the options and possibilities they can provide you to have all the possible situations that happen to you in matches.

It is a highly recommended ping pong robot because of numerous features like regular software and firmware updates for enhanced performance, small and lightweight remote control for your convenience, and customizable time intervals for personalizing your practice session.

But if it’s slightly out of budget, there are two other models at a bit lower price, the Power Pong 2001 and the Power Pong 3001, which are also worth checking out.

Newgy also has a more expensive Bluetooth model (the Robo-Pong 3050XL), but if you are looking for a ping pong robot that you can control via your smartphone, you should get the Power Pong Omega and nothing else.