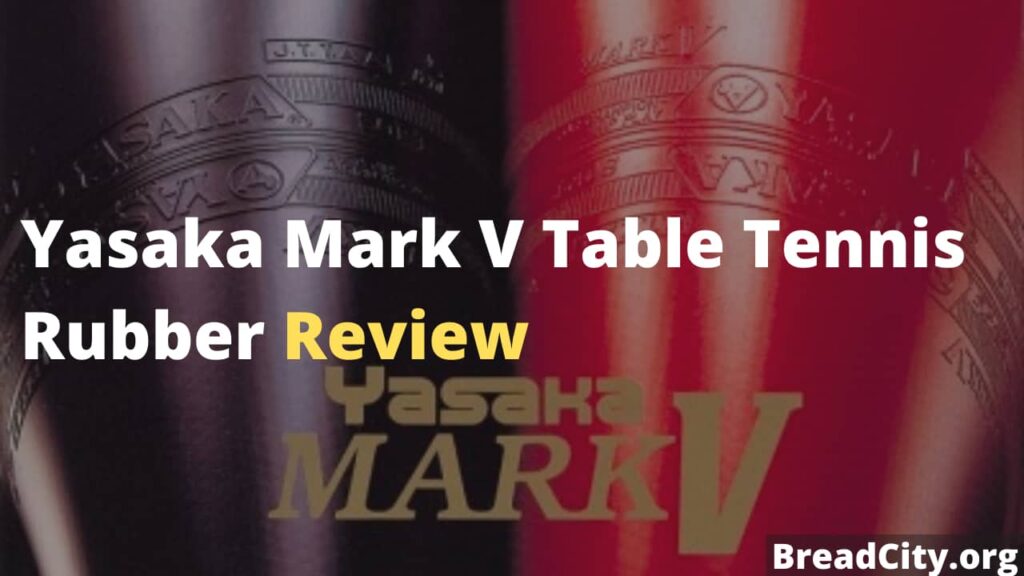 Yasaka’s table tennis rubber, which has been used by tens of thousands of players worldwide, including Olympic champion Ma Lin, is one of the most popular rubbers in the sport.

Even though it’s a long-lasting classic rubber, it’s not especially slow, making it an excellent option for beginners or intermediate players. This table tennis set will soon become one of your favorites.

As an outstanding player, you’ll return to the game repeatedly to keep improving. As part of this piece, I’ll share my thoughts on the Yasaka Mark V and discuss some of the factors contributing to its widespread acceptance. 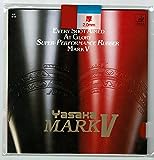 1. Achieves the Appropriate Speed and Control –

Frequently, when it comes to rubber thickness, consumers aren’t sure which option is the best suited for their specific requirements and situations.

Consequently, the Mark V rubber was created to address your concerns. It is available in several thicknesses to accommodate players who need varying degrees of control, speed, and spin from their rubbers.

The rubber thickness of 1.5mm, in my opinion, is ideal for rubber that will not supply you with very much speed but will give you greater control over the ball. Even though 1.8mm is quicker, it still provides a good mix of power and speed in most situations.

To have thicker rubber on both sides of the blade, place 1.8mm on both sides instead, as seen in the image below. The ideal thickness is 2.0mm to improve your overall speed and performance.

2. A Powerful Tournament Tool at a Low Price – 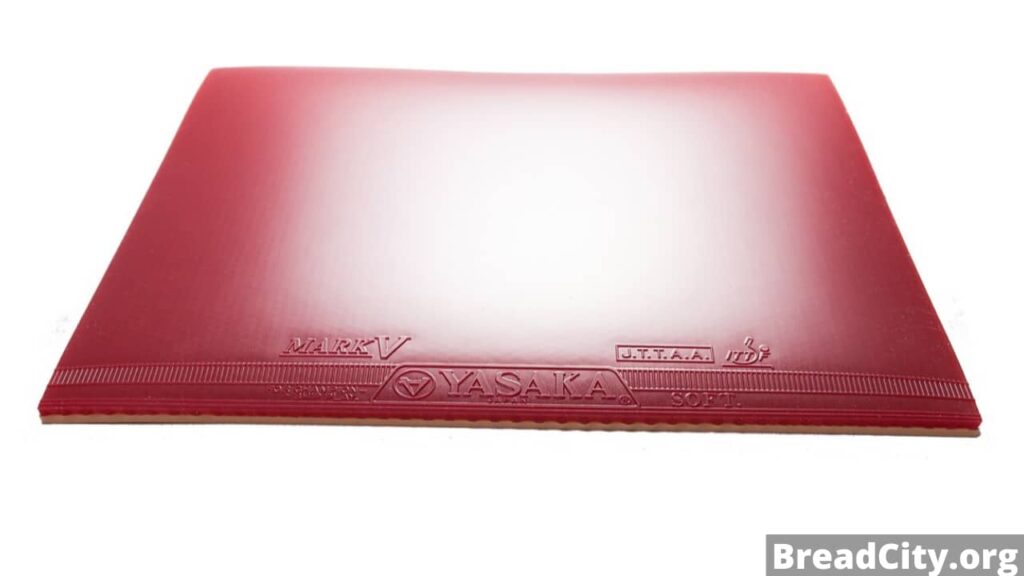 To improve the power of the Mark V, which is a touch soft but has outstanding control, it is often used in combination with a hard surface carbon blade. The pricing is one of the most reasonable of any table tennis rubbers ever.

It is one of the most popular choices among players. It is a bit less expensive than its competitor, Butterfly Sriver, which is a little more expensive.

Consequently, Yasaka Mark V is widely regarded as one of the first rubbers to include both natural and synthetic rubbers in its formulation.

Because of its dynamic speed and spin qualities, this rubber has been a deadly weapon in world championship competition for more than two decades.

This is because the amount of speed created using rubber is determined by its thickness. When you’re a novice, it’s usually better to start with thinner alternatives to get used to controlling the ball faster.

1.8 and 2.0 are the most popular selections among customers, so go with one of them if you’re still unsure.

While all sponge thicknesses will create approximately the same spin when you stroke the ball if you loop drive or loop hard, a thicker sponge will generate more spin than a thinner sponge.

4. A Widespread and Reputable Rubber –

Due to its dynamic spin and speed potential, Mark V has established itself as a firm rubber in world-class competitions for more than two decades.

Several professional table tennis players have found it a great tool in their quest for various championships. It is the market leader in the rubber profiles sector. It provides the highest-quality rubber available on the market today.

This rubber is produced using both natural and synthetic rubbers, making it one of the first rubbers ever had. There are no restrictions on how well this rubber performs for players of all skill levels, regardless of their ability.

The Yasaka Mark V is the most efficient rubber you can put on your skates right now in terms of speed, spin, and control. When seeking a rubber with all of these properties, go no further than the company’s rubber products.

You should consider using paddles that focus more on control as a starting point. Xiom Vega Intro paddles are among the most popular paddles for beginners. It would help if you considered acquiring one of these paddles for yourself.

1. Superior Adhesiveness of the Surface –

MARK V rubber generates many spins due to its excellent sticky surface properties. With the newly created micro-adhesive surface, it is possible to significantly boost the rubber’s spin ability and power stability, which is combined with the ability to improve the elasticity and spin of the material.

Even though it is neither the fastest nor the most spinny, it provides a remarkable blend of decent speed and terrific spin, and superb control, all at an affordable price.

Because of the forgiving quality of this rubber, you will be able to return a solid ball even if your technique or stroke is mediocre. A player’s arsenal should include moves like the loop, backspin, and block, all vital for intermediate and elite players.

This Mark V rubber is a high-quality rubber that is long-lasting, stable, and long-lasting in its performance characteristics.

2. Unbelievably Configurable for the best game – 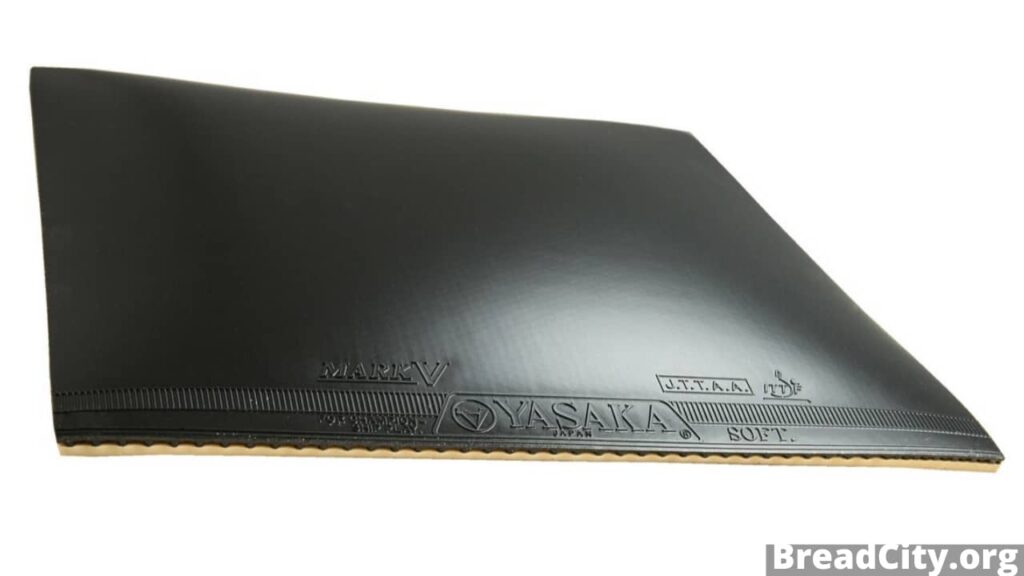 The Mark V is an adaptable instrument that enables you to execute any shot you want with complete confidence. Using this rubber to block and counter-hit is a breeze. It lets you maintain superb control when blocking and countering-hitting.

The rubber provides excellent control and power on topspin while maintaining an outstanding balance between the two. It can create a lot of spins while still being relatively easy to put the ball. Furthermore, you will exert significant control over your service to others.

After a quick test, I discovered that the rubber did not seem to be as sticky as I had imagined. If you try to hit it with a tennis ball, it will not pick up the ball and move it off the table as you expect.

Rubber is a material with a very long shelf life in the environment. I’ve had it for three months, and the rubber is still in terrific condition, nearly as good as when I first bought it.

Upon touching the surface of the top sheet, you will notice that it has a spongy feel to it. The rubber sponge does not have a smooth or firm surface like a traditional sponge.

If you don’t get a perfectly looped loop, it’s still a fantastic outcome, in my opinion. Depending on how you construct your service, you might get many spins.

It’s also a fantastic cutting rubber, apart from the above. When my opponents’ strokes have accumulated a great deal of speed and spin, it is feasible to chop the ball very effectively in my favor.

It provides me with an effective chop, which I find appealing. This shot may be used from either the backhand or forehand side of the court.

I realized that it was somewhat effective to see whether I could play the rubber with my backhand. If you want to get the most performance out of this rubber, it is advised that you use a blade with medium to medium-hard hardness.

In the case of beginners looking to enhance their backhand looping or forehand spins, there is no better rubber to start with than this one.

I believe it is an excellent choice for any aggressive player who does not require the blazing fast speed of something like the Butterfly Tenergy 05 Table Tennis Rubber.

It is also perfect for any player transitioning from a cheap paddle to their first real racket with a sponge thickness of 1.5-2.0mm. Almost anything is possible on the table with it.

It will let beginner player improve their game without the rubber forcing their peculiarities on the table. It also responds well to speed glue since it has a similar feel but is somewhat quicker and spinner in response.

1. Acclimation to the rubber may take time –

Because it is a very rapid rubber with a lot of spin potential, it may take some time for you to get used to it. It is intended for players who desire lightning-fast speed but aren’t worried about control and players who want great control but aren’t concerned with speed, among other things.

Only players who want a rubber that is exceptionally fast or extremely slow with tremendous control should look elsewhere. The conventional rubber is still a good choice for beginning and intermediate players since it is long-lasting and all-around suitable for all situations.

Although it is not very fast, it is far from slow, and it will soon become a favorite in your table tennis collection. Even if you’re an experienced player, you’ll repeatedly return to it.

So, what’s the fuss with Mark V?

Its versatility is one of its greatest assets. Mark V is a dependable and consistent player in all facets of the game, pushing, shielding, looping, or serving a ball to an opponent.

Combining this with very high durability and price that is competitive for a Japanese rubber, it is no wonder that this rubber has remained so popular throughout the years.

The Mark V is particularly effective against players that use a high volume of spins since the rubber is generally unaffected by incoming spin (in comparison to most contemporary rubbers), making it considerably easier to keep the ball on the table and apply pressure to the opponent.

What is the distinction between Mark V Red and Mark V Ykm5B Black regarding rubbers?

You are free to design the rubber, give it whatever characteristics you choose, and paint it any color you desire; it is all up to your preference. There is no difference between the processes used to make a black rubber and those used to make red rubber, and vice versa.

When playing tennis, it is essential to think about the characteristics you want for your forehand and the attributes you wish to for your backhand before hitting the ball.

Is the Yasaka Mark V Table Tennis Rubber something I’d propose to someone?

Even though thicker variants are available for more competitive people who demand more speed and less control, this is an excellent first rubber for beginners who wish to preserve power.

You may expect it to endure at least a few years since it is made of a durable rubber compound. It performs well with the vast majority of blade types.

However, to increase its power, you must pair it with a carbon blade with a firm surface to maximize its performance. Although it is less expensive, its quality is equivalent to, if not more significant to, competitors.

Few rubbers on the market are more reasonable than this one, which is much less costly than its significant rivals Donic and Stiga and slightly more expensive than Butterfly Sriver FX Table Tennis Rubber.

In my research on the Yasaka Mark V, I’ve concluded that it may be ideal for beginners and intermediate players who seek to develop their technique while still in the early phases of their professional careers.

This rubber generates fantastic results in your strokes. Still, for it to be successful, you must apply your abilities to it, which finally sharpens your ways due to your efforts.

But if you are an aggressive player who enjoys hitting the ball with rapid speed, this rubber may not be the best choice for you. In the case of Tenergy 05, it is a rubber that is seen as offensive by the public.